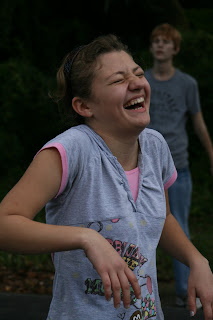 "You know how to do The Bomb, right?" Robert asked tossing the football between his right and left hand. Kristina eyed him skeptically. Determined to stay out of it, I raised my book a little higher and feigned increased interest in the current passage. From my vantage point on the front lawn, I could see she was curious.

"You're going to run straight out and then cut right or left, but you've really got to run far out," he instructed.

Hand propped on hip, she countered, "What do you mean?"

"Leslie! Leslie, come show Kristina how to do The Bomb, " Robert implored.

"Robert, I don't do The Bomb. I am The Bomb," I replied without lowering the book. 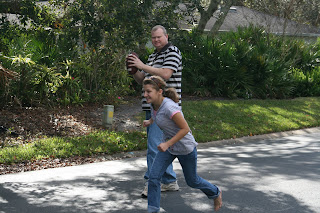 I heard his sigh of exasperation as he recruited Samuel and Hannah. An hour later and they were red faced and laughing hysterically at each other in the street. I couldn't resist setting my book aside to take up the camera and click a few shots. 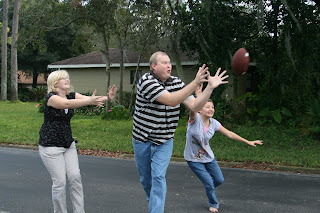 Merry Christmas to you all! How about that surprise snow in Mississippi? I pray God will show you soon where your future will be - Mississippi or Florida. God Bless -