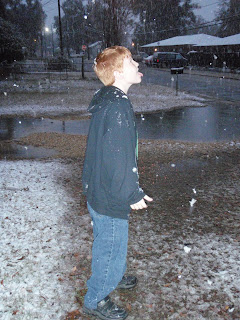 When the forecast called for snow on Thursday, all the English teachers in my wing started praying for wintry manna from heaven. Snow=no school.

I awoke at 5am and peeked out the window. Rain was falling but no snow. I hopped in the shower and started my morning routine, grieving the loss of a day off to catch up on grading papers and sleep late. I clicked on the television to see the local forecast still predicting snow, a once a year phenomenon in these parts. A quick return to the window was rewarded with puffs of white beginning to dust the car top. Minutes later, the text messages from my girls in the English Dept. confirmed that ours prayers had been answered: no school!

I made the mistake of waking Robert to tell him about the snow and he immediately had the children up and on the front porch. Of course Kristina was unimpressed. After all, snow is nothing new to her. She groaned and rolled over unwilling to budge from her snugly blanket cocoon.

Obviously snow is even more impressive when you're traveling 40 mph, so Robert decided we needed to drive through town to get the full effect. Everyone threw on warm layers. The directions were simple: shoes on, everybody in the car ASAP. Now, I blame Robert who scooped the first handful off the hood of the car and hurled the frozen sphere at Nathanael's unsuspecting head. Before I knew it, I had six screaming kids (yes, I'm counting Robert) running across the front yard, pelting each other with snowballs at 6am. Our poor neighbors. I hid in the warmth and security of the car until they gave up because of numb hands and red faces. 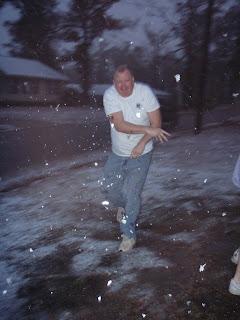 I headed for a nearby gas station to fill up. The directions were simple: everybody stay in the car while I pump the gas. But do they listen? Noooooo. They ran in circles around the car, climbing on the bumper to get an aerial advantage and diving behind the pumps to avoid incoming projectiles. She may not have been impressed by the snow, but Kristina has an arm built for throwing snowballs! I declared myself Switzerland, neutral, and threatened anyone who raised a glob of snow in my direction. To my horror, I noticed patrons and staff gathered by the windows at a diner across the way pointing and laughing at the spectacle that my family was causing.

"Hey! Let's have breakfast!" Robert decided. I smoothed the ice of a snowball gone astray from my hair and tried to regain some dignity as I walked into the diner. We slid into red and white vinyl booths under the judgemental stares from photos of Elvis and James Dean and settled on a meal of warm, fluffy pancakes. 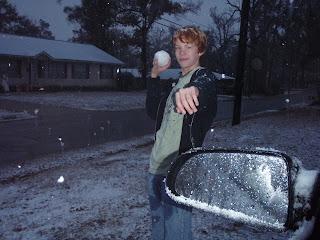 Once home, the kids returned to the front yard to team up with neighborhood kids in a full snow battle. I wish I could say I spent the rest of the day knocking out all the papers that accumulate on my desk, but I enjoyed my snow day and got absolutely nothing accomplished!

Love it! Thank you for taking us along for the ride. Snow is still enough of a novelty to us; we were raised in sunny Southern California...we're a long way from that here in Colorado!

Glad to see you blogging again. I miss your writing. I never did get to interview you for the Kristina DVD. Sorry I missed you when you visited O town. Next time you're down please make sure we connect. We have a lot to catch up on. I'd love to see Robert and the kids too.

Glad you had fun! I was hoping to take a snow day too! Snow is too much of a novelty not to enjoy it here and why should it matter that we home school?!

Anonymous said...
This comment has been removed by a blog administrator.
10:53 PM

Sounds like a fun morning. You needed a day off from work (and from grading papers). Yes, hard to believe we got so much snow. It only snows here once every 7-9 years and this is the second time we have had snow this year! WOW!